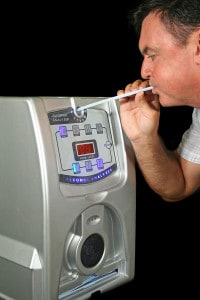 When it comes to the ability to test and monitor alcohol in a person’s bloodstream, there are many different devices available for both private use and those that are legally mandated as part of a criminal conviction. These devices not only keep track of a person’s alcohol consumption, but, serve as a protective measure against those who would drink and drive. For 75 years, devices that test the blood alcohol concentration (BAC) of a person who has been drinking have been helping to keep our communities safe, and as technology evolves, these devices will continue to deter people from driving drunk.

If a person has not been convicted of an alcohol-related crime, such as DUI/DWI, the proactive monitoring of alcohol in the bloodstream can be done with special key chains or hand-held devices. Some bars even have alcohol testing machines for patrons to use. These breathalyzers help a person determine whether he or she has had too much alcohol before driving, eliminating the potential for a DUI/DWI traffic stop, accident, injury or death. There are also smartphone apps available to pair up with a breathalyzer and help a person determine when he or she is able to safely drive after consuming too much alcohol.

Ignition interlock devices are quickly becoming a mandatory consequence for anyone convicted of driving while under the influence of alcohol. Ignition interlock devices, or IIDs, take the choice to drink and drive away from a DUI/DWI offender by testing for alcohol in the bloodstream. If a person’s BAC registers above a stated limit, the device will disable a vehicle from operating, either by not starting the vehicle or forcing a person to pull over and stop the vehicle if the test is performed while it is in operation. Newer technology is also enabling these IIDs to take a photo of the person using the device, ensuring that the convicted offender cannot bypass the test by having someone else blow into the breathalyzer.

For some offenders, being monitored around the clock for any alcohol use is a consequence of committing an alcohol-related crime. These monitors are transdermal, and fit around the ankle or wrist. Transdermal alcohol monitors test the sweat of a person, rather than the breath, for any alcohol in the blood but cannot accurately determine the actual BAC of a person. Instead, the transdermal alcohol monitors report the consumption of a small, moderate or large amount of alcohol.

From the first device used to test BAC in 1938 to today’s high-tech ignition interlock devices, the ability to monitor and test for alcohol in a person’s bloodstream has enabled more secure communities across the U.S. As more states continue to refine their own laws regarding DUI/DWI, the presence of alcohol monitoring and testing devices will grow, as will the technology to back them up.