What is the Cost of a DUI? 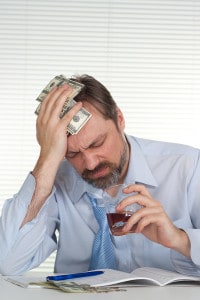 A DUI is a crime in the U.S., with a defined blood alcohol concentration (BAC) limit that defines the line between a drunk and “sober” driver. With an estimated cost of $132 billion each year, according to Mothers Against Drunk Driving, everyone in the country pays for the irresponsible choice to drive drunk, not just the drunk driver. For those who are convicted, the actual cost of a DUI can vary, depending on the number of prior convictions, as well as the state in which the crime occurred.  The average cost of a DUI is estimated to be around $10,000, however, and is attributed to the following consequences and penalties:

However, the cost of a DUI is also one that can carry on well past the sentencing requirements. Many DUI offenders experience problems maintaining employment because of a lack of transportation due to a license suspension or revocation. If a job is lost, it can be just as difficult to find a new job with a criminal record that reflects a drunk driving charge, as well as the same transportation issue.  Because of the reliance we all have on transportation for work and life responsibilities, ignition interlock devices are able to keep a convicted offender on the road, without chancing another drunk driving incident.

The cost of a DUI, at its most tragic, is the loss of life that can occur due to another person’s negligent behavior. Drunk drivers take the life of another person every 51 minutes in the U.S., a sad statistic that can and should be changed. Because of the high cost of a DUI, whether financial or personal, there seems little reason for any states to not have strong laws against drunk drivers. $10,000 is a startling number, but, one that is avoidable when a person remains responsible while drinking.