Difference between OWI, DUI and DWI

You are here: Home / Law / Difference between OWI, DUI and DWI
November 28, 2012 by Editorial Staff

A drunk driving conviction is not only a legal situation that has a wide range of personal, financial and potentially deadly consequences, but it can also carry those consequences into a person’s life for many years. When a driver is charged and/or convicted of drinking and driving, the legal world is set in motion. Understanding the different terminology of alcohol-related driving convictions can help the person realize the depth of his or her illegal activity, possibly even eliminating the possibility of further convictions.

While somewhat interchangeable, the legal definitions of drunk driving convictions are DUI, DWI and OWI. 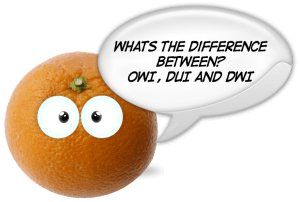 Driving Under the Influence (DUI): While alcohol is the most common substance found in any person convicted of a DUI, drugs and inhalants used while driving can also result in a DUI conviction. Blood Alcohol Concentration (BAC) can be measured at a traffic stop through a Breathalyzer test, resulting in a DUI arrest. The DUI term is the most commonly used descriptor for these arrests and convictions.

Driving While Intoxicated/Impaired (DWI): Just like a DUI, a DWI can refer to the use of alcohol, drugs or inhalants while driving. Blood Alcohol Concentration (BAC) may be tested at a traffic stop, or field sobriety tests may be used in order to determine whether a driver is intoxicated/impaired. The DWI term is somewhat less common than DUI.

Operating While Intoxicated/Impaired (OWI): Also known as Operating Under the Influence (OUI), this term refers to a broader definition of what constitutes dangerous activities including a vehicle and alcohol or other substance. Activities include sitting in a parked car while it is on, or even sleeping in a car while it is in “park.”

Not all states use the same terminology when it comes to alcohol-related driving offenses, and each state has penalties for drunk driving convictions. Pentalties for DUI, DWI or OWI can include fines, incarceration, installation of ignition interlock devices and much more. Knowing the risks involved to the driver and others on the road, operating a vehicle while under the influence of alcohol is a mistake that can have life-long consequences. Always be sure to drive safely and obey the laws surrounding drinking and driving.