Are Those Blue Lights for You? Your First New York DWI Traffic Stop

You are here: Home / Resources / Are Those Blue Lights for You? Your First New York DWI Traffic Stop
May 5, 2015 by Editorial Staff 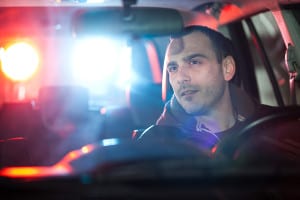 Eventually, we all look into our rearview mirror and see blue lights flashing right behind us. There’s a moment of panic, a sinking feeling in our bodies as our brains try to figure out just what we did to deserve such a display of glowing illumination. Your first New York DWI traffic stop can feel a bit like this, and even if you haven’t been drinking, you need to be prepared for what comes next.

A police officer will determine if there is probable cause for any sort of sobriety testing and even a chemical or breathalyzer test. Due to “implied consent” laws in New York, any refusal of the tests will immediately cause the officer to suspend your license and you will be taken into custody for further testing.

If you submit to the breathalyzer test during a New York DWI traffic stop and haven’t exceeded the legal blood alcohol concentration (BAC) limit, you probably won’t face a DWI charge. However, if it is determined that even at a lower BAC level, you are a risk to others on the road, you could face a lower Driving While Ability Impaired by Alcohol (DWAI/Alcohol) charge.

If your breathalyzer test shows that you are at or above the legal limit, you will be arrested and your license will be suspended immediately by the authority of the New York DMV. From there, you’ll be able to temporarily drive in order to facilitate your court hearing and DMV hearing, if you choose to contest the DWI charge. If you do not contest the charge, your license will be suspended pending your court hearing.

If you are found guilty of a New York DWI, you will pay fines, court costs, possibly attend a victims’ impact panel or be ordered into a substance abuse screening. You’ll also only be able to drive again if you install an ignition interlock device, even if it your first DWI conviction.

Not knowing what to expect during a DWI traffic stop in New York is no excuse for drinking and driving. Instead, just remain sober when driving and you may never have that “eventual” shock of flashing blue lights following your every move.

What Happened to the Interlock Removal Bill in New Mexico?
Next Post: DWI Reboot: How Long is the Missouri “Washout” or “Lookback” Period?