How Arizona BAC Affects Your DUI

You are here: Home / General Information / How Arizona BAC Affects Your DUI
August 23, 2016 by Editorial Staff 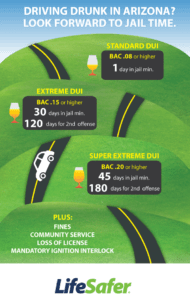 Arizona is tough on DUI offenders, with both administrative and judicial penalties handed down as the result of the circumstances surrounding their arrest. For example, with a blood alcohol concentration (BAC) at or above .08 percent or by refusing the Arizona BAC test entirely, an offender has an immediate administrative license suspension through the DMV. That BAC is a factor in even more consequences for a DUI driver in Arizona, with the freedom to drive legally hanging in the balance.

Arizona has an Extreme DUI policy for drunk drivers with .15 percent BAC or higher.

At .15 percent BAC, a person has likely lost all ability to be responsible with alcohol consumption, being behind the wheel and most other life-altering decisions. .08 percent BAC is the legal limit for a DUI in all states, making the high BAC extreme DUI an obvious danger on the roads.  If your BAC is at or above the .15 percent limit, Arizona will immediately revoke your license (not suspend) to send a strong message about how the state doesn’t tolerate drunk drivers. Once your revocation period is over and you are given the “all clear,” you will likely have at least a year with an ignition interlock device to keep you from repeating your mistake, or disabling your vehicle if alcohol is detected in your breath sample. After a second DUI offense in Arizona, you may also face the impoundment of your vehicle, plus higher fines, more jail time and a longer interlock requirement.

Whether Super Drunk or Extreme DUI, a high Arizona BAC is a recipe for disaster

Some people rely on math to keep them under the BAC limit, while others stop counting after just a few drinks. The best bet to avoid an extreme DUI in Arizona or even the lesser BAC version is to keep a steady head before you’ll be drinking and figure out how you’ll get back home even before you step out of your front door.