Kombucha and Your Ignition Interlock Device

You are here: Home / General Information / Kombucha and Your Ignition Interlock Device
March 3, 2017 by Editorial Staff 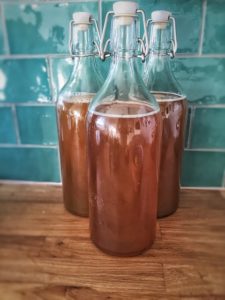 Just when you think you’ve got this healthy lifestyle stuff under control, you hit a new bump in the road: kombucha. Your favorite almost-vinegar drink of champions could possibly set off your ignition interlock device, rendering all of your hard work at the gym, and your post-DUI lifestyle changes, pointless.

Kombucha contains a trace amount of alcohol that can act like the real stuff, causing an ignition interlock violation.

Without getting into the reasons people may drink fermented beverages like red cider vinegar or kombucha as they spin away on a cycle or engage their core in HIIT, it is important to remember that fermentation results in alcohol. The same alcohol found in other fermented beverages like beer, wine or liquor. Even a tiny, trace amount of alcohol can set off your ignition interlock device. If healthy living was easy, everyone would do it, right?

Even the government is getting into the kombucha-alcohol debate. A bill was recently introduced to reduce the tax on kombucha, citing the additional cost doesn’t make sense, given the nature of the drink. It isn’t intoxicating, no more than a “near beer” or alcohol-based mouthwash is, and shouldn’t be taxed as such. However, when it comes to an ignition interlock device, kombucha (or vinegar) should absolutely be treated as though they are alcohol. That means that if you consume those drinks, allow yourself a little time before blowing into your interlock, and maybe swish out your mouth with water, too.

A healthy lifestyle may include kombucha or other super foods, but we can all agree it definitely includes sober driving. Even the most dedicated DUI offender can get thrown off by a false positive ignition interlock test after drinking certain beverages, and running the risk means less time to hike in the woods or play at the gym.

Previous Post: ← Is Drinking and Driving is Bad? Not Everyone Thinks So.
Next Post: When Will I Get an Iowa Ignition Interlock Device? →