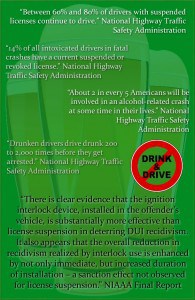 Drinking and driving is a serious offense, affecting the lives of one in three people over the course of a lifetime, whether as a passenger, impaired driver or victim of an alcohol-related accident. With an estimated 300,000 incidents of drinking and driving each day, costing the United States $132 billion each year, the implications of driving while intoxicated are both daunting and far-reaching. Even worse, one-third of drivers arrested or convicted of driving while intoxicated are repeat offenders, making recidivism a strong factor in the fight against drunk driving.


In 2010, over 1.41 million drivers were arrested under the suspicion of driving under the influence of alcohol or driving while intoxicated.
Preventing alcohol-related vehicle injuries and deaths begins with education and the support of laws restricting those who drive while intoxicated, including teenagers, repeat offenders and habitual drunk drivers.
Category: ResourcesTag: Drunk Driving, Impaired Driving