Leandra’s Law and Your Ignition Interlock

You are here: Home / Law / Leandra’s Law and Your Ignition Interlock
February 4, 2015 by Editorial Staff 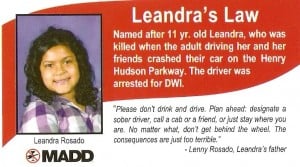 In 2010, New York revised a law that would require ignition interlock devices for all DWI offenders. “Leandra’s Law,” as it is still known as today, was implemented in 2009, after the DWI-related death of 11-year old Leandra Rosado. The initial law only required a DWI offender with a blood alcohol concentration (BAC) of .18 or higher to use an ignition interlock device. With the effectiveness of the program, it was a logical step to include all DWI offenders with at least a .08 BAC in order to further reduce the risks of drunk drivers on the streets of New York.

An ignition interlock is a technology-based device that attaches to a person’s vehicle and requires a “clean” breath sample in order to start the car. If a person has been drinking, the device will be able to detect alcohol through the breath sample provided and will disable the vehicle’s ignition system. Once that person is sober and no alcohol is detected in the breath sample, the vehicle will start and operate as normal. All test failures are reported to the court or designated agency, however, so an offender will face additional penalties for attempting to drink and drive. That means that not only is the driver safe from harm, but, any passengers in the car or other drivers on the road are safe, as well. With “Leandra’s Law” and similar programs across the U.S., there are fewer risks for any child and adult to be injured or killed due to a drunk driver.

When laws are made, they are often named after an important person who inspired the change. Unfortunately, many times those people are victims, and far too often, those victims are children. In this sense, New York’s “Leandra’s Law” is a reminder to us all that we are not only risking our own lives when we drink and drive, but, also the lives of those too small to call a taxi or find a sober ride home.

Previous Post: ← Don’t Lose Your License: Implied Consent in New Mexico
Next Post: An Ignition Interlock for a Drug-Related DUI? →