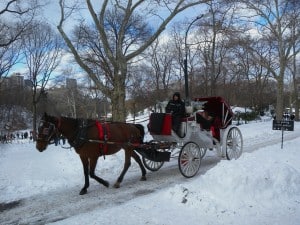 Leading a horse to water and making it drink are two entirely different animals, so to speak. You can demonstrate anything until you’re blue in the face,but, if a person (or a horse) does not want to follow in your footsteps, all of that effort is wasted. That’s the same problem New York City is facing when it comes to their ignition interlock requirement for drunk drivers. Somehow, despite some of the toughest DWI and ignition interlock laws in the country, New York still is not seeing the full benefits of their efforts… because offenders in New York City just won’t install the devices.

It seems simple enough: in New York state, a convicted drunk driver is required to install an ignition interlock device  in order to legally drive. But, a recent audit indicates that no matter how many New York City interlock requirements are handed out… only a few offenders are actually following the rules. Ignition interlock devices only work if they are used as directed, and when a DWI offender is not compliant with the regulation, they are more likely to drink and drive again… and again.

Of course, there is a possibility that with the public transportation and urban lifestyle of NewYork City, it a DWI offender could just take the subway or a taxi to and from their destination. But, that does not mean that offender can eschew their drunk driving consequences. Even when a car is parked “for good,” with an ignition interlock requirement, it seems that the person should still take the appropriate steps to prove that some day, they can drive again without drinking. That means the ignition interlock requirement, while not as convenient as New York City public transit, is still an effective tool in the fight against drunk drivers… even if those drivers are waiting out their suspension and simply walking away from their court-ordered obligation.

Previous Post: ← Should You Refuse a DWI Test in Phelps County, Missouri?
Next Post: Why Alcohol “Serving Facts” Matter →