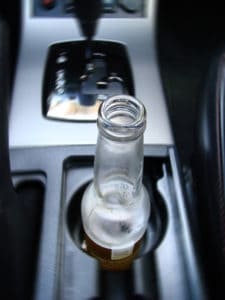 Illinois open container laws state that no open containers of alcohol are allowed in vehicles where the driver could have easy access. That includes the passenger area and glove compartment. The state also restricts passengers in a vehicle from drinking alcohol, too. That helps eliminate any temptation of the driver to maybe sneak a sip or two while behind the wheel and other dangerous scenarios.

The open container guidelines set forth by TEA-21 state:

Illinois is one of the majority of states that is in full compliance with TEA-21 guidelines, as well as the recommendation for other drunk driving prevention measures, like its all-offender ignition interlock requirement.  It may seem counterintuitive for anyone to attempt to drink and drive, and especially to drink while drive, but both scenarios still play out each day on our roads. With safety a top priority, both Illinois, and the federal government are looking out for everyone’s best interests and safety by eliminating open containers of alcohol and insisting on even more ways to curb drunk driving.

Previous Post: ← Cutting the Costs of a Missouri DWI
Next Post: Wake Up! Wisconsin OWI Dangers are Real →