Why Do People Binge Drink? 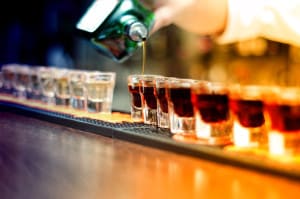 Recently, a woman won a steak-eating contest, consuming over 200 ounces of meat in 20 minutes. The crowd cheered, spurring her onto victory as she took home $6,000 in prize money for the feat. Food eating contests are a great way to show what a “binge” is, as we watch men and women ingest ginormous volumes of hot dogs, pies or snack cakes. Then, we ask, “HOW do they do it?” “WHY do they do it?” and proclaim, “That CAN’T be healthy!”

We don’t know how they do it, but it is usually done for a prize, or at least bragging rights… and no, it’s not the healthiest way to eat.

Binge drinking follows a similar path. Defined as a man drinking five or more drinks in two hours, or a woman drinking four or more drinks during the same time, binge drinking is not only dangerous for the person drinking, but for others who may be impacted by their behavior. Drinking and driving is common among binge drinkers, especially if they get into their vehicle before fully processing the alcohol that was consumed. By the time they’re well into their drive, the extra alcohol can hit, turning a fairly sober person into a dangerous situation within a very small span of time.

With the dangers involved, why do people binge drink?  People binge drink to quickly relax, or because of inexperience with alcohol. Some people binge drink to quickly forget their problems, while others really want those bragging rights – that they can drink more than their friends… or those same friends are encouraging the binge. Unfortunately, no matter the reasoning, it just isn’t a good habit, and it could cost you in the long run financially, physically or even with the frustration of an ignition interlock device if you’re convicted of drinking and driving.

Moderation is the key, they say, to a healthy life. Obviously, any kind of “binge” isn’t a moderate activity. Instead of seeing who can eat or drink themselves into a stupor, take your time with friends and enjoy the experience of a regular meal, even with a drink… then find a safe, sober ride home.