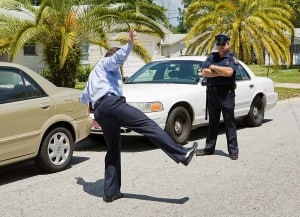 A sometimes controversial subject is sobriety checkpoints. While all of us know it is dangerous to drink and drive, that knowledge alone does not keep people from driving while inebriated. For that reason, law enforcement has enacted saturation patrols, roving patrols, and sobriety checkpoints. But, what are the differences among these three activities? Many people ask that question, as well as a few others regarding the constitutionality of these endeavors.

The first thing to remember is that the purpose of saturation patrols, roving patrols, and sobriety checkpoints is to keep the streets safer for all drivers. Alcohol-related crashes cost our society over $132 billion each year. Therefore, keeping drunk drivers off the road is a major priority for our communities and law enforcement departments. Most people are probably familiar with sobriety checkpoints, so let’s discuss them first.

Sobriety checkpoints are highly visible areas where law enforcement officers stop random drivers to make sure no one is driving under the influence (DUI). Usually, officers stop every other driver or some other regular interval of drivers. In this way, there should be no discrimination or profiling, because drivers are chosen randomly in an orderly fashion. Breath tests are only conducted if an officer has reason to believe the driver has been drinking. The goal is not to arrest people, but to stop DUIs. Only one arrest is made per 88 drivers over the legal limit, on average.

The Supreme Court has ruled the sobriety checkpoints as constitutional due to the compelling state interest in saving lives. The CDC has found that the checkpoints reduce alcohol-related crashes and deaths by up to 24 percent. Checkpoints also save state and local governments up to $23 for every single dollar invested. This shows that these saturation patrols, roving patrols, and sobriety checkpoints not only save lives, but they save money. The states that currently prohibit sobriety checkpoints are: Texas, Idaho, Washington, Iowa, Michigan, Wyoming, Rhode Island, Minnesota, Oregon, and Wisconsin.