The Truth About the Florida “DUI Flyers”

You are here: Home / Resources / The Truth About the Florida “DUI Flyers”
January 21, 2015 by Editorial Staff 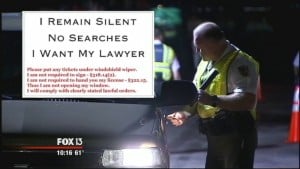 Legend has it, there are plenty of ways to get out of a drunk driving charge when pulled over by law enforcement. Some people swear by sucking on pennies to fool a breathalyzer test, while others may practice field sobriety tests at home on the off chance they’re suspected of drinking and driving. Some could say that by preparing to pass a field sobriety check, or a sobriety checkpoint, a person is already intending to drink and drive. For those who make a one-time bad choice to get behind the wheel after drinking, it may not even make sense why anyone would practice for that “$10,000 ride.”

Then, you have Florida, and the “DUI flyers” that have captivated those most likely to need a breathalyzer test while pulling through a sobriety checkpoint.

A DUI flyer is a piece of paper that is held inside a baggie also containing a driver’s license, registration, insurance card. The bag is hung outside the driver’s side window as a person goes through a sobriety checkpoint. It is supposed to declare a person’s right to an attorney, and a warrant, before the driver rolls down his or her window. It is legal, yes, but it could also be more hassle than it’s worth.

What a DUI flyer may accomplish is more scrutiny on your behavior, and it isn’t just the smell of alcohol on your breath that can cause a more thorough examination of your level of intoxication. If you have been drinking and try to fool the police with a DUI flyer, you may be required to pull over and wait for your attorney, or for a warrant to search your vehicle. Some places could even charge you with obstruction of justice.

The bottom line is that while many argue a DUI flyer in Florida is merely a person stating his or her rights to not be searched by police, it is highly likely that anyone with one of the flyers could just be trying to drive home after a night at the bar. Since Florida is tough on drunk drivers, including high fines, an ignition interlock requirement, and more, maybe the time spent preparing a DUI flyer is better spent planning a safe way to get home after drinking.