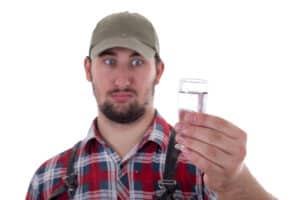 190 proof liquor is the equivalent of 95% pure grain alcohol.

There is a lot of math that goes into safe drinking. From BAC (the percentage of alcohol that can be detected in your blood) to the measurement of alcohol in the drinks you’re drinking.  Adding it all up, math can make it easier to avoid drunk driving, until we factor in all of the variables, like the higher proof of alcohol. For instance, a standard serving of liquor is 1.5 ounces, containing about 40% alcohol. For the same punch, you can only drink .5 oz (three teaspoons) of Everclear.

That number is why lawmakers and others in the state are concerned with the sale of high-proof liquor. Three teaspoons of liquor is laughable, in particular on college campuses where Everclear is often used in “Jungle Juice” and other types of beverages. Plus, statistically speaking, the more alcohol that is consumed (whether serving size or the proof of the alcohol), the higher the rate of drunk driving, sexual assault, and property crimes. Virginia DUI laws are already strict, making many question the rationale behind selling such high proof liquor.

Obviously, the answer is to be aware of what you are drinking at all times, and take steps to keep yourself safe. A Virginia DUI could be a life-altering event, one that can be a direct result of high-proof liquor, or just a choice to drive home after a few too many beers at a bar. No matter what, the alcohol math can quickly add up to a Virginia DUI, ignition interlock requirement or worse, no matter the proof of your favorite beverage.