Weird DUI: You Got a Wisconsin Snowmobile OWI?

You are here: Home / Offbeat / Weird DUI: You Got a Wisconsin Snowmobile OWI?
October 19, 2017 by Editorial Staff 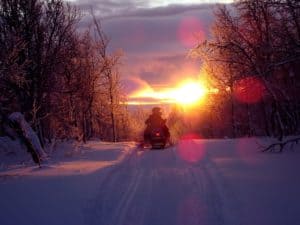 Most laws are the result of a person doing something wrong, something that hurts another person’s body, property, or possibly just their feelings. It may also be obvious that a lot of crimes occur under the influence of alcohol. Those innocent beers with friends quickly lead to dangerous decisions, because inhibitions are lowered or judgment flies out the window. While not violent, the weird DUI law criminalizing a drunken snowmobile ride in Wisconsin are still an indication that wherever there is alcohol and a vehicle, the lives and property of others need to be protected.

Evidently, intoxicated snowmobiling in Wisconsin is a pretty common, but weird DUI (OWI).

The state reports an unusually high amount of OWI incidents that occur on snowmobiles. This won’t surprise those who understand how Wisconsin OWI law works. For an OWI that occurs behind the wheel of a car, truck, or SUV the penalty is sometimes nothing more than a traffic ticket. Most first-offense OWI incidents are not criminalized, especially if nobody got hurt and nothing was damages (this type of OWI is defined as a “simple” drunk driving incident). Because the state does not take a strong stance against drunk driving, residents understandably do not see their intoxicated actions as a big deal.

That weird DUI attitude can also bleed over into other intoxicated crimes, including driving a snowmobile while under the influence of alcohol, as well as violent crimes, sexual assaults, and more.

There probably is not one person out there who does not see the connection between alcohol and crime, or at least alcohol and bad decisions. Yet, each day, people still drink and drive, or drink and end up with an ignition interlock requirement, or in jail for those decisions. An OWI on a snowmobile may seem like a typical Wisconsin problem, but it is also an illustration of just how easy it is to make a smart choice before drinking and just not allowing alcohol to impair our own common sense.