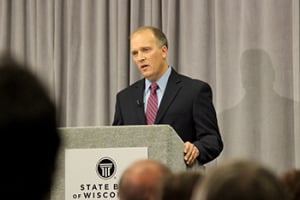 With the 2014 elections barely over, the eyes of residents in Wisconsin were on the election of a new Attorney General, and specifically, what that could mean for the state’s drunk driving problem. The two opposing candidates were both seen as “soft” on criminalizing first-offense Operating While Intoxicated (OWI) convictions in Wisconsin, a step that is highly recommended by Mothers Against Drunk Driving (MADD) and other organizations across the U.S. to reduce the toll of drunk driving on the state.

Despite calls for action from residents in Wisconsin to criminalize a first-offense OWI and increase the use of ignition interlock devices for drunk driving offenders, Wisconsin may still be stuck in the same pattern as in years prior. The newly elected Attorney General, Brad Schimel has said in debates that he hasn’t seen any reason to make a first-offense OWI a misdemeanor charge, as the process would cost more to the state than alternative deterrents to the OWI problem. Instead, his recommendations were to increase saturation patrols, victim impact panels and other, less punitive measures in the state and to encourage more studies on the problem as a whole.

Wisconsin is well known for its problem with drunk driving, and the state’s newly elected Attorney General seems to be the most likely proponent of changing the way drunk drivers are punished for endangering lives each day. As the headlines in the state describe OWI offenders with multiple convictions, sometimes 10 or more, it is a difficult to understand the hesitation surrounding changing the OWI laws. Since “watching and waiting” for a change to the laws has been unsuccessful in reducing or eliminating drunk driving incidents in the state, it seems that the only thing left to do is to take action. There is no reason for Wisconsin’s soft stance on drunk driving, and hopefully the new Attorney General will make changing the OWI laws a priority in the coming years.