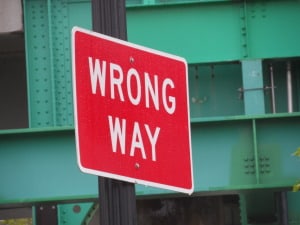 If you have ever gotten lost or confused in an unfamiliar part of the country, you know the fear that the bright “wrong way” signs can cause, especially when you’re staring at one as you drive by. Now, imagine driving down a road, the right way, directly into oncoming headlights. Which situation is preventable? Driving the wrong way can happen to even the most careful driver, but, the majority of wrong-way driving accidents aren’t caused by tourists, newly licensed teen drivers or the elderly – they’re caused by people who have been drinking and driving.

Michigan has a similar rate of wrong-way drunk driving accidents compared to the rest of the country, matching the national average of 60 percent. As recently as September, 2014, a Michigan woman was killed as the result of a wrong-way drunk driving accident, the seventh wrong-way fatality in Michigan this year.  Unfortunately, even as rates of drunk driving and fatal traffic accidents decrease, the National Transportation Safety Board (NTSB) reports that the number of fatal, wrong-way accidents has not changed over the last decade across the U.S. The problem is not the signs or the roads being marked unclearly – it is the confusion that comes with drinking and driving that increases the chance of a wrong turn onto a wrong road.

It’s pretty scary that these  bright, red, “wake up” signs are on our roads and highways because of drunk or drugged drivers, especially considering the choice that is made when getting behind the wheel while intoxicated.  Of course, many feel the presence of an ignition interlock device is a scary indication that a person has driven while intoxicated, too. The scarier sight, however, is seeing another car coming at yours when you are powerless to prevent what happens next. Wrong-way accidents in Michigan are too often the result of driving under the influence of alcohol or drugs. With seven fatalities in the state, and countless more across the country, there is only one “right way” to drive: sober.

Previous Post: ← Open Container Laws in Wisconsin: Don’t Even Think about Drinking While Driving.
Next Post: Rise and Shine: Drunk Driving and the Morning After →