A Florida DUI on a Horse… Debate?

Yes, you can be charged with a Florida DUI on a horse. 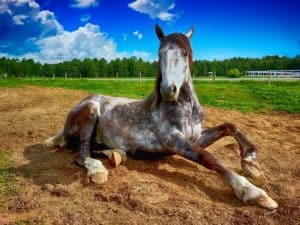 It is no laughing matter, of course. But it is a warning to anyone who tries to drink and then operates any type of vehicle that transports person or property. That means a car, truck, SUV, bicycle, skateboard, lawnmower or a horse can all be a vehicle in the Florida DUI debate. The recent story about a woman who was arrested for a Florida DUI is getting a lot of attention, and not just because it is another wacky Florida DUI story.

A “vehicle” in Florida is defined as:

(97) VEHICLE.—Every device in, upon, or by which any person or property is or may be transported or drawn upon a highway, except personal delivery devices and devices used exclusively upon stationary rails or tracks.

We don’t normally consider horses to be vehicles. Yet, they were pretty much the standard vehicle before bicycles and motorized vehicles became as common as today’s smartphones. Horses are known to be highly intelligent animals, but they are quite literally not the controlling power at the reins. If that person in the saddle (or in the driver’s seat) is unable to safely direct (drive) the horse, there are definite risks to the rider/driver, to the horse/vehicle, and to anyone or anything in the path.

Despite claims otherwise, the Florida DUI on a horse story holds legal water, outside of the horse/vehicle debate. The suspect was given a blood alcohol concentration (BAC) test at the time of her arrest, with a reading that was well over the legal limit of .08 percent.

In any other case, a BAC over the legal limit, plus dangerous behavior on the road when driving a vehicle, will always equal a DUI charge.

The lesson here is more than what is or is not a vehicle in Florida or any other state. The lesson is that if you are drinking, let some other (sober) person take on the challenge of getting you to and from wherever you wish to be. The road to recovery after a DUI can be long and frustrating, and there is nothing debatable about the peace of mind that comes from a sober ride home.

Previous Post: ← Ready to Drive after a Mississippi DUI?
Next Post: How to Get Back on the Road after a Missouri DWI →