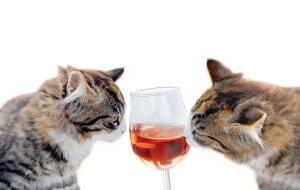 After the ball has dropped on New Year’s Eve and people begin to get back into the daily groove of life, the resolutions for a healthier, better, more successful year begin to ring out around the world. One of the most common New Year’s Resolutions is to drink less alcohol. This resolve is important, especially when considering many people still drive after drinking, causing accidents, injuries and even deaths for too many people.

Alcohol can not only be dangerous for humans, but, also for beloved pets. Sometimes, people may find the concept of a dog or cat drinking humorous, when in fact, giving an animal alcohol can be deadly.  Alcohol affects pets in much the same way as it does humans, however, and pouring that tiny bit of beer into a pet’s  water bowl can be a big mistake. Many veterinarians caution that because of the smaller size of our animals, even a tiny bit of alcohol can put a pet into a dangerous situation requiring emergency medical care.

Another caution with pets and alcohol is the pet owner who tries to drive after drinking with a furry friend in the car. Pets that ride in cars are not always harnessed, as is recommended by veterinarians, but are instead allowed to roam free in the vehicle. Much like with DUI and child endangerment, a pet has no choice about riding with a driver who has been drinking. If an intoxicated person has an accident, the pet is in danger of an injury in general, but, with no safety belts to keep a pet in one place, the animal can be seriously injured or killed.

Drinking responsibly is a great gift for anyone, and especially for those who are unable to make a decision on how alcohol will affect their lives. When it comes to alcohol, always be sure that any pets or animals are safe and protected – whether in the home or while driving around in a vehicle. You will be assured of a safe and healthy relationship with your pet for many years to come.