You are here: Home / Law / DUI and Child Endangerment
April 15, 2013 by Editorial Staff 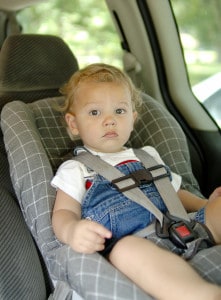 When we think of drunk driving accidents, our minds may flash upon stories we have heard about children getting hit while crossing the road or something similar. Mothers Against Drunk Driving (MADD) was started by a mother with such an experience. However, there is another type of story starring inebriated drivers and children and that story involves drunk driving with children as passengers in the vehicle. It is just as dangerous for a child to be in the car with an inebriated driver and many states are holding these drivers accountable for child endangerment.

According to MADD, 62% of children ages 0-14 who were killed in alcohol-related traffic accidents in 2010 were passengers of the inebriated driver at the time. This is partially due to the fact that inebriated parents are less likely to buckle their children in, since only 18% of inebriated drivers in fatal crashes had properly restrained their children. So far, forty-three states and the District of Columbia give more severe penalties for driving under the influence (DUI) convictions involving child endangerment.

While every state handles the DUI child endangerment issue differently, there are some common tendencies. For instance, most of the DUI state laws define “child” as a youth age fourteen or younger. Also, there are harsher penalties enforced, whether the conviction is considered a misdemeanor or felony. A DUI child endangerment conviction is a permanent part of your criminal record. This, of course, affects many other aspects of a person’s life, regardless of the positive changes the person attempts to make later.

New York, Arizona, Oklahoma, and Texas have some of the most severe DUI child endangerment penalties. In fact, New York’s Leandra Law is considered the desired model for these laws nationwide. In New York, a person can be charged with DUI child endangerment if the child is age sixteen or younger. The penalty is a felony charge and punishable by up to four years in prison. The driver’s license is automatically suspended and the individual is ordered to use an ignition interlock device for at least six months once driving privileges are reinstated. If the inebriated adult is a parent, guardian, or custodian of the child in question, the person is reported to the Statewide Central Register of Child Abuse and Mistreatment.

As you can see, DUI child endangerment laws add a level of severity to an already difficult situation. It is not easy to deal with any DUI charge and adding child endangerment to it can have more lasting effects than one might expect. It is simply not worth it. The easiest way to avoid any sort of DUI conviction is to simply refrain from drinking and driving. It is a healthy and responsible choice, for you, your community, and the ones you love.