How Many Non-alcoholic Beers to a DUI?

You are here: Home / General Information / How Many Non-alcoholic Beers to a DUI?
May 25, 2017 by Editorial Staff 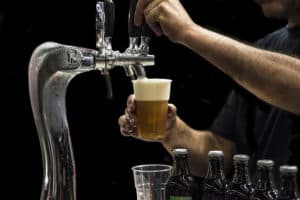 Heineken is just one brewer that is jumping on the non-alcoholic beer bandwagon.

Some non-alcoholic beer may still contain a trace amount of alcohol, up to two percent in some cases. The average alcohol by volume (ABV) percentage in beer runs around five percent, although there are always exceptions to that, especially with microbrews and specialty beers. In the Heineken case, zero means zero, the new non-alcoholic brew is basically beer flavored soda. No alcohol, no DUI.

In Japan zero also means zero when it comes to non-alcoholic beer. In the case of the zero alcohol DUI in Japan, the woman claimed to have consumed 15 non-alcoholic beers. Her blood alcohol concentration (BAC) level was four times the legal limit, which is expected through consuming 15 regular beers or light beers. When you multiply zero by any number, the BAC should be zero, and while police breathalyzers are just as sensitive as ignition interlock devices to the presence of alcohol, a reading that high indicates the drinks that were consumed were not without alcohol.

As more brewers launch products that contain trace amounts of alcohol, or those without any ABV to report, we can all enjoy the taste of beer without the DUI and other complications. However, it may be in your best interest, and the interest of other drivers on the road, to ensure that whatever you are drinking that claims to be without alcohol actually contains no alcohol.