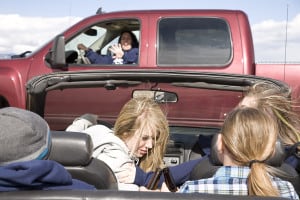 The Shattered Lives program is a role playing, interactive activity designed for teens to act out for the benefit of members of their schools and communities. The point is to display the various choices teens have the opportunities to make in their daily lives and how the choices they make affect others in their communities. Part of what makes the program stand out is that the students are acting, but there is no script.  This allows them to involve their own thoughts and emotions as much as possible and helps to make the production as realistic and moving as it can be. Another moving aspect of the program is that the effects of the choices the teens make in the production are shown across all divisions. Teens are encouraged to not only think about how their choices affect their lives and the lives of their families and friends, but also the lives of emergency workers and their families and friends.

How the Shattered Lives program works is that teens get together to put on a play about the ramifications of underage drunk driving. During the play, certain teens will lose their lives in an accident and emergency workers will rescue survivors, convey messages to families, and perform the various other tasks that accompany emergencies. There is also a grim reaper character that comes and takes the lives of certain teen actors. The program relies upon parents, as well, and encourages teens to improvise their own death scenarios.

The main point of the Shattered Lives program is obvious: teens need to understand that the choices they make today affect their futures and the futures of everyone around them. Creators of the program believe that part of this comprehension relies upon being made aware that youth does not equal immortality. Shattered Lives aims to make clear to everyone participating and watching that death is real and nothing to take lightly. Each school that participates in the program decides for itself how the basic premise will be acted out since the program is designed to be personalized and adaptable.

Students Against Drunk Driving (SADD) is currently suggesting its chapters look at the Shattered Lives program and see if it can help them in any way because the program has been so moving and touched so many lives amongst both teens and parents. The program allows for the teens involved to really take a look at how drunk driving could impact them personally, as well as the world around them. It also empowers them by allowing them to use their imaginations to the fullest while producing the show, since no scripts are used.