Television, the Internet and Underage Drinking

You are here: Home / Resources / Television, the Internet and Underage Drinking
November 13, 2014 by Editorial Staff 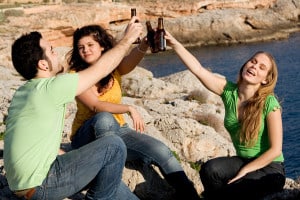 There are various arguments about how kids start drinking alcohol before age 21, all of which point the finger at parents, the media or peer pressure when it comes to underage drinking. Children of alcoholics are more likely to drink alcohol before they are legally able to, but, kids who are without the influence in the home are still drinking at a young age, perhaps due to exposure to the “fun” of drinking on TV or online. The reasons for underage drinking are as varied as the situations that encourage college-age keg stands and sneaking sips of dad’s beer, but, the dangers involved can be deadly.

The alcohol industry has limitations on advertising that may be viewed by children. There are guidelines that prevent beer ads on certain network channels for children, as well as time limits for when ads can be shown on “all ages” networks. Some say that Reality TV is getting around those limitations, because as a television show that depicts “real” life situations, alcohol is inevitably a part of the daily grind. In a sense, underage drinking is encouraged through advertising, online gaming, Reality TV and the like just by normalizing its presence – and parents may not even realize just how much kids are being exposed to drinking.

Parents should, of course, monitor their kids’ online and media exposure, model responsible behavior and talk about the dangers of underage drinking. But, it doesn’t stop there. With the effectiveness of ignition interlock devices in reducing the rate of drunk driving arrests in the real world, the presence of the devices in the media could do the same.  Software developers could place ignition interlock devices in “car and driver” video games to simulate the experience of consequences of a drunk driving conviction. TV shows could easily include characters that have to blow into an ignition interlock device as a way of normalizing its function (over the idea of drinking alcohol) and to serve as a warning to minors that anyone, even on a favorite show, must drink responsibly or face the consequences.

Previous Post: ← Why is Florida MADD for Ignition Interlock Devices?
Next Post: The Dangers of Drinking and Biking: BAC and your Bike →