You are here: Home / Law / Way to Go, Maryland: Ignition Interlock Devices for All Drunk Drivers!
April 5, 2016 by Editorial Staff 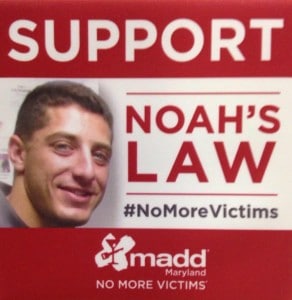 Maryland has just taken another big step toward an all-offender ignition interlock law: the state Senate just unanimously voted to pass “Noah’s Law,” increasing the consequences for drunk driving in the state and the safety of all drivers on the roads. Specifically, this bill requires an interlock for all offenders, plus an interlock requirement for anyone who refuses a breath or chemical test during a traffic stop.

The current ignition interlock policy in Maryland only requires a DWI offender install and maintain an ignition interlock device for any second or subsequent offense, or for those first-time DWI offenders with a high blood alcohol concentration (BAC). That meant that a person with a first-time DWI (with less than .15 percent BAC) did not have to install the device, and could, in fact wait out the suspension time associated with the conviction. After that time was up, the offender was back on the road without any way to ensure they weren’t repeating their DWI mistake.

Ignition interlocks have stopped 1.77 million attempts to drink and drive in the U.S. within the last decade, so it isn’t a stretch to point out how many Maryland drunk drivers could have been stopped in their tracks, as well, with an all-offender policy. Montgomery County Police Officer, Noah Leotta, for whom “Noah’s Law” is named after, was killed by a suspected drunk driver while at a sobriety checkpoint. With an ignition interlock device, that tragedy could have been avoided, and many other similar stories, as well.

After seven years of trying to get tougher restrictions on drunk drivers into Maryland, it is time to embrace the difference an all-offender ignition interlock policy will make. Once a final bill is agreed upon, it goes to the governor’s desk, where it all becomes official, if it makes it there by April 11.

To voice your support for Noah’s Law in Maryland, contact your Delegate, Senator and Governor Hogan before the deadline and make a difference in the safety of Maryland’s roads!