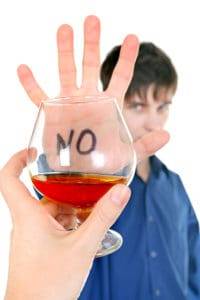 Underage drinking isn’t a “kids will be kids” thing. While many may claim it doesn’t make sense that an 18-year-old can be drafted into the military but cannot order a beer, science says those young brains aren’t developed enough for alcohol. At least the drinking age isn’t 25, right, science? Fortunately, our kids may be smarter than previous generations and taking the long-standing rule to heart. In 2016, underage drinking rates fell across the U.S.

Underage drinking leads to a wealth of problems, including property damage, sexual assault, and DUI. Underage drinking is also closely linked with binge drinking and alcohol poisoning. For a minor under 21, their brain isn’t as developed, with already prevents the best judgment. Add in alcohol and there are even more risk factors for these inexperienced drinkers, with an ignition interlock requirement or community service lower on the list than permanent injuries or death.

Teaching kids that they have a choice about drinking and driving is important, just like their choice to only ride with a sober driver.

Those numbers may be falling, but that is no reason to stop the teaching moments we all have with our young drivers. Remember to explain to them the consequences of driving under the influence of alcohol, both in your household and legally. Then, make sure you set an example and model the same behaviors you expect from your children. The most effective way to reduce underage drinking and DUI rates is to demonstrate what a healthy relationship with alcohol is, and that the best plan to have is one where you get home safely at the end of a night.

Previous Post: ← What Alcohol Eye Drops and Underage DUI Have in Common
Next Post: Will There Be a New Wisconsin OWI Plan? →