You are here: Home / Offbeat / Weird Things DUI: Drunk on a Plane
July 6, 2017 by Editorial Staff 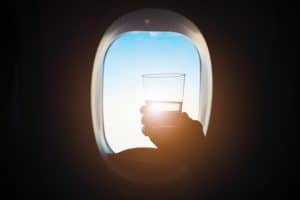 At any time we could be injured by a drunk driver. That’s why we have consequences like an ignition interlock device in place that prevent people from driving under the influence of alcohol. Then, we see a people sitting at an airport bar and wonder, what about that rumor about getting drunk on a plane, just like the Dierks Bentley song? Can people get drunk, faster, while flying?

Leave it to Mythbusters to bring some sense into that whole question. It is a lot like the myth behind drinking a beer with a straw and how that can supposedly get you drunker, in the sense that both are just rumors.

Our brains are wired to perform best under familiar situations, and when those situations have more (or less) stimulation, our same, beautiful brains try to make sense of things so that we can function as normally as possible. Being super high in the sky, no pun intended, doesn’t actually cause us to get more drunk. Our bodies don’t slow down the metabolism of alcohol in the face of a higher altitude, so when we feel more intoxicated while flying, that’s actually the altitude just doing its low-oxygen thing. We feel a little bit more drunk on a plane even if we’re not drinking, because our brain is trying to get itself back to normal.

That’s pretty similar to the drinking beer through a straw – the euphoria is pretty much all in our heads, and due to a vacuum, lack of oxygen, or just not using common sense.

The boosted, drunk on a plane feeling often levels out as we land and deplane, but remember you can still get a DUI if you drink and then hop behind the wheel of a car. Just like if you’re planning a night out with friends, if you know you like your cockpit cocktails and have to drive yourself away from the airport, make sure you have a way to get from point A to B without the dangers of being a drunk driver.